The Mark of Detail 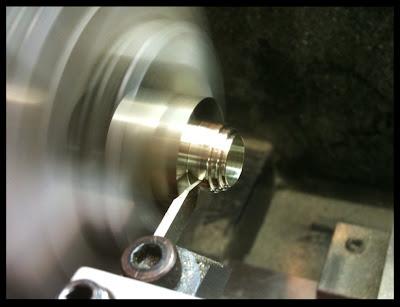 Turning a tiered winding check for
a new “Trails End” 7' 4wt.
If you've ever seen a model 1873 Colt .45 Peacemaker from the barrel to the grip all of the elements of the hardware have a definitive cadence. The craftsmanship when it comes to the original intent of the firearm from function to form is unwavering. I often use the term “Mr. Potato Head” when I look at a fly rod, firearm, automobile, etc... that have both features and functions that are unintentional adaptations and lack harmony. Unlike the Colt .45 Peacemaker, the result is a product that has no sense of place or point of view.

When I was 26 years old I was called out of class at Art Center College of Design in Pasadena CA and driven out to San Bernardino to meet the engineers and designers at Saturn (prior to the brand launch in the marketplace) they were unveiling their vehicles for the first time in a large auditorium. I was 1 out of 8 other designers pulled from ACCD to critique the new Saturn vehicles. After a highly descriptive crit from a transportation designer sitting next to me it was now my turn and around 300 people including video cameras were focused on me. The car designers were sitting behind me, which made me a bit apprehensive. I simply stated that the 7 shiny prototypes that sat in front of me “had no sense of place, they were an amalgam of many vehicles which reminded me of a series of Mr. Potato Heads, they could be from anywhere, and from several different manufacturers”. At this point I felt a hand on my shoulder, it was one of the car designers leaning forward and he whispered that I was “very perceptive in my point of view”. I was then asked to leave. On my way out of the auditorium one of the Saturn designers came running out from behind me and shook my hand and told me that they had in fact had created a series of vehicles that were very much like a family of Mr. Potato heads. 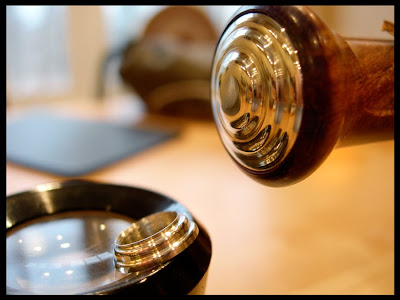 Finished tiered winding check to complement the
“Trails End ” butt cap as well as cork check
Often I see bamboo fly rods that are an amalgam of factory made grips, spacers, nickel hardware, etc...I feel that if somebody is going to pay a lot of money for a fly rod they should not be getting a Saturn. Instead they should be getting the recognizable and intentional marks of its given craftsman. A definitive geometry should give the artifact a sense of place and reason to be.

Every piece of hardware has to sing in tandem with it’s given rod. It’s kind of like putting a pair of dragon fly wings on a mayfly, some things have to be created as a single thought in order to fly right.