The Calm Before the Rise 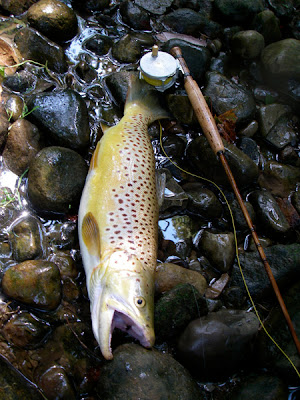 Nice Mad River Brown and my “Little Mecoche” 6'9" 4wt.
Eventually we all find our favorite river and come back to it season after season to reacquaint ourselves with ourselves and hopefully catch some fish. We hear our own breath and heart beat after a long winter in an environment that is always conducive to clarity and focus. We also hope that we can let go of our expectations, frustrations, and distractions the moment we hit the water. I recently fished when I was very ill and it reminded me of an important lesson that I learned nearly thirty years ago from a very wise man.

Robert Gilmore was not only a great teacher but a great artist. His still life paintings would stop you in your tracks and leave you weak in the knees. I can still smell the distinct odor of his favorite pipe tobacco (Amphora). He was a short stocky man with a twinkle in his eye and a gruff but good natured personality. Gilmore studied with the late Walter Murch a student of the Art Students League of New York. Murch was a well known illustrator for publications such as Scientific American for many years as well as a successful teacher (Pratt Institute NYC) and a popular showing artist of his day. I left everything that was familiar and comfortable to study under Robert Gilmore. His mentorship was one of the greatest experiences of my life. As I remember the first time I set up an easel in his studio in Spokane Washington I spilled a whole quart of gesso down my pants. I found myself intimidated, embarrassed, and a bit physically uncomfortable. Gesso tends to dry quickly like most acrylics. My underwear at the time was properly primed for some serious oil painting.

One winter night months later I was alone in the studio painting and that familiar smell of Amphora tobacco seemed to get stronger by the minute. I was very sick and had a fever but was motivated to get deep into a painting. Gilmore turned the corner out of the darkness, looked at my painting, and smoked his pipe for a few minutes. He squinted and stared at my canvas for a few minutes that uncomfortably felt like hours. He said nothing to me.

He finally pulled his pipe from his mouth and said “are you sick?” I replied “very much so” he then said “I can tell because you are outside of yourself”. He stuck the pipe back in his mouth and left the studio.

The “fever painting” I was working on eventually ended up in a show at the Cheney Cowles Museum. I later understood what he meant by “outside of yourself”. When we are under duress and discomfort our defenses, and predispositions tend to come down and we think less and let our instincts take over. Our bodies are stressed so our minds become calm and focused, our defenses and bad habits crumble. Eventually Gilmore was convinced that I painted best when I was sick, wounded, or bleeding out of some extremity. I suppose the damaged and dark loner that quintessentially represents the craftsman state of existential angst holds some merit when it comes to a passionate and enlightened brush stroke or wood shaving.

Staring at a blank canvas can be as intimidating and vast as stepping into a new river with no rise forms. This logic I put to practice to this day. If you stare at a twelve foot bamboo culm, in its natural form, and imagine it as a finished fly rod its enough to give anybody the shakes. But if we empty ourselves and approach an activity or situation with a lack of self-focus we can “be outside of ourselves” and actually become part of the action in a genuine and unfettered natural way. I suppose I learned this precept through sheer physical discomfort early on from past health problems. By simply letting yourself be as you are and taking your guard down, you eventually develop genuine energy between your environment and your engagement with it. If we can visualize our hands completing an activity before we’ve started, we can find genuine confidence in actually achieving it. Similarly if we can creatively visualize the calm before the rise form, we can see the trout eventually on our hook.
~Clint Joseph Bova
Posted by Clint Joseph Bova at 11:36 AM

Labels: Flyfishing from the cerebral cortex 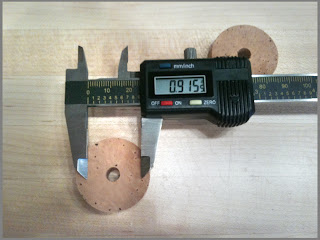 I recently had a customer comment on the great quality of my grips so I though I would comment a little on the topic. Cork is a beautiful thing in its most natural form and is warm to the touch. Typically I look at them very carefully. I do not use fillers in my grips simply because I do not have to.
If you have ever seen cork grips that look like they should be hanging off of a fishing net in the middle of the Atlantic look a little closer at many of the rods sold at retail today. Many grips with fillers look like the grip has been extruded out of a sausage maker. 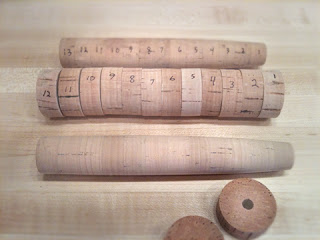 The above photo shows what a premium grip looks like after
going through the extra step of locating the lenticels, numbering the
measured rings, and placing them in sequence. Thus avoiding them
during the final turning process.
I start out by using the best cork I can get and then take it one step further. I measure all the clusters of lenticels in the rings to miss the final surface diameters of the intended grip profile. By doing this I avoid the interruption of lenticels on most of the surface area. Filler free is my motto... always.

~Clint Bova
Posted by Clint Joseph Bova at 7:42 AM

Ginger On the Fly 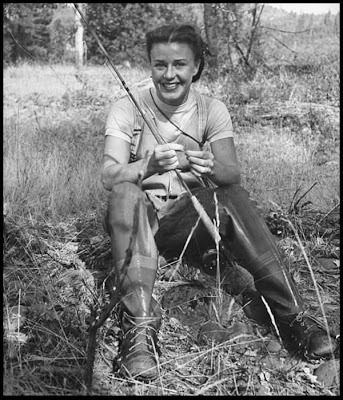 The picture was taken for a cover of LIFE back
in 1942 by photographer Bob Landry
“The most important thing in anyone's life is to be giving something.
The quality I can give is fun, joy and happiness. This is my gift."
~ Ginger Rogers
Posted by Clint Joseph Bova at 6:49 AM