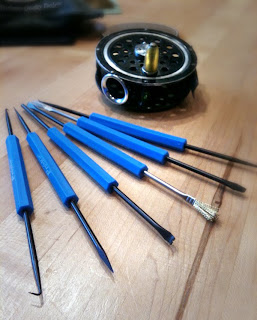 Every so often I come across tools that just seem to make life all that much more easier. Short of purchasing dental tools at a premium price, Pro'sKit (www.proskit.com) makes a selection of small tools that work excellent for fixing old reels, cleaning and restoring old hardware, taking grime out of pawl springs, sweeping or picking grime out of spools, and generally great for getting in tight spaces. I use some of these tools to clean my string binder as well as cleaning grime out of guide feet when overhauling and refinishing rods.
Having little tools such as these in the face of all the adversities rod making dishes up is priceless, and for 10 bucks you can't beat it!
~Clint Bova
Posted by Clint Joseph Bova at 8:59 AM 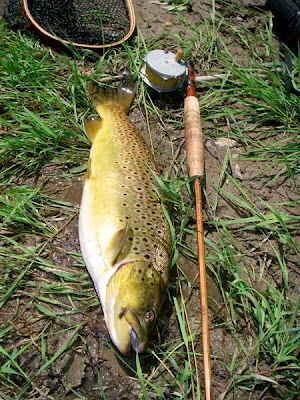 Sometimes the big Grandaddies get particular in the feeding lane. I caught this Brown in about 12" of clear water on the Mad River earlier this week. This picture shows a #18 dry Midge pattern in this Browns jaw. He was refusing “the naturals”, Hendricksons, in the feeding lane. I watched him for a few minutes from downstream. I kept seeing a big orange flash, sucking in the invisible something, while larger mayflies just floated right over him. I resisted the urge to float a dun near his head so I grabbed my old faithful little down wing Caddis pattern, aka my “Little DWC”. Tied small doubles as an effective midge pattern as well. Whomp! It's always nice to open a season up with a fish like this. The Rod in the picture on top: 7'3" 4wt. “Moluntha” 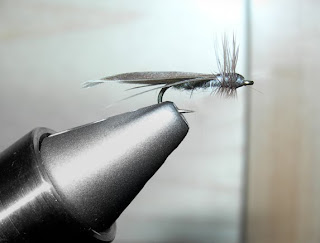