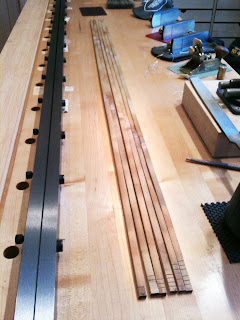 I often get asked what is your favorite part of making bamboo fly rods? I typically respond by saying “fishing them”. My follow up response is simply “handling the cane”. There are many ways to experience the process of making a fly rod I choose to experience it without the use of tapering bevelers, gang saws, and a crew of craftsmen. The final result is typically a great rod of some kind either way. I just choose to experience the process in a more intimate way when it involves splitting, straightening, and planing. I have used all of the above mentioned equipment at one time or another but I feel when I do I have missed out on the real joy of making a cane rod. I always have accepted the merits of using more machinery but I don’t experience the same level of intimacy with the cane when I do. Experiencing every inch of a spline and its given nodes track around in my head at night like an endless ticker tape. After all we are not fighting cane monsters we are simply manipulating a raw medium to create a very useful artifact. The level of peer pressure I get to use more machinery is somewhat daunting but I suppose if it came to that I would probably stop selling rods altogether and just make rods for myself and friends. I will probably be eating my words when my orthopedic surgeon tells me my hands and arms are no longer operable. Oh well if the process brings me to my ultimate demise so be it. The words of Friedrich Nietzsche echo in my head often.


Whoever fights monsters should see to it that in the process he does not become a monster. And if you gaze long enough into an abyss, the abyss will gaze back into you.
~Friedrich Nietzsche
Posted by Clint Joseph Bova at 8:11 AM

There are often moments within a fishing season where time is better spent walking with a youngster down to your favorite piece of water. Simplicity is always better, just handing him or her a few fly’s will make their day that much more memorable. Find a knot that they are comfortable with and find a fish that they can remember for years to come. Sounds a bit sentimental but honestly it really does make a difference especially if the youngster has no father to speak of. His father may have been shipped off to Afghanistan and has nobody to drive him to a stream let alone have someone to go fishing with. It is a simple act of kindness that goes a very long way. It may be your next door neighbors kid, it may be a single mothers child, or it may even be your own son or daughter. Sharing your time is a God given gift and fishing’s “fine simplicity” accounts for many priceless moments of discovery. Take a little one to the river its never too late in the season.


Fishing is much more than fish. It is the great occasion when
we may return to the fine simplicity of our forefathers.
~Herbert Hoover
Posted by Clint Joseph Bova at 9:02 AM 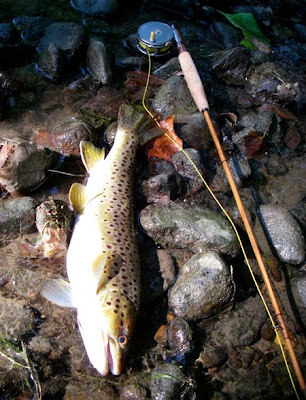 19" Mad River Brown August 2010
Caught on a #22 Black Quill Trico  Spinner
Above rod: My Tecumseh 7'6" 5wt.
The dog days of summer can prove to be frustrating and tedious to say the least especially if your efforts are put to the test with the dry fly. Early bird catches the trout, long leaders with 6x and 7x tippet, and size 20 and smaller Trico patterns will prove to pay big dividends. The saying “adversity introduces a man to himself” is the moment to moment mantra especially if you happen to see a surface pecking 20 inch brown. Chunky Browns sipping Tricos in 10 inches of clear water in a slow and spooky pool is what gets my heart pumping. This is usually during daybreak so the shadows and contrast are a bit deceiving adding to the level of difficulty. Taking a downstream position with a trico spinner at this time of year early in the morning proves successful, but drop a #16 something or another can clear out an entire pool. Hoppers are a crap shoot because you only have one chance and the big ones are easily spooked in slow shallow meandering runs. 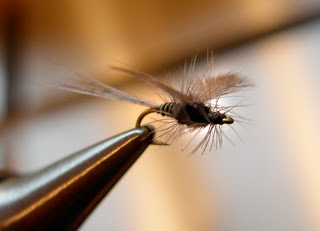 Green Quilled Trico Spinner #22, dun wings,
crisscross dun hackle around thorax, coq de leon tail,
great for visibility in the wee hours
I avoid using white hen wings on my Trico spinner patterns because the flash of white will spook the trout if a false cast happens to break his cone of vision. So I opt for medium dun pullet wings. I also use a parachute pattern for Trico spinners again using a medium dun hackle and a dun turkey flat post for the above reasons. I also like using black or green dyed quill patterns (AK Best Inspired) these seem to give ample flotation for visibility as well as a couple of turns of hackle around the thorax crisscross like the technique Vince Marinaro uses on his Thorax Duns. These simple variations of the Trico can prove deadly especially in low light conditions. Tying these patterns test my patience as much as presenting them but the principle part of catching fish in faith is patience.


“The key to everything is patience. You get the chicken by hatching the egg, not by smashing it.”
~A. Glasgow
Posted by Clint Joseph Bova at 8:41 AM

Tripoli otherwise known as rottenstone I have found is my tried and true method of polishing bamboo fly rods. A mixture of boiled linseed oil and tripoli seems to always bring a smile to my face when I first mix it up. It is a bit archaic I suppose but I'm funny that way especially when it comes to finishes. I connect the smell of linseed and tripoli to a sense of completion and when the new owner pulls the rod out of the case he or she can actually smell the level of detail as well. Many rods are finished with satin type varnishes (silica imbued matting agents) but the act of polishing a rod using traditional methods gives me a deeper layered finish. I find that I can spot the silica finishes and they look somewhat artificial even though they are a time saver for many rod makers. Then again I mix my own spar concoction so my process already is a bit more labor intensive. There are many ways to skin a cat but the tripoli treatment just rings true for me.

~Clint Bova
Posted by Clint Joseph Bova at 11:43 AM

Death of the One of a Kind Artifact

I have spent my life up till now earning a modest wage using my hands. I don't care if you make yo-yo's, knives, smoking pipes, illustrations, or furniture. If it comes from your bench, drawing board, or cave and it is handled by your hands from natural materials of earth origin and you transform the raw into something “usable” or “artful” it is one of a kind. This has been a topic of heated discussion since Robert Henri wrote “The Art Spirit”. He took a lot of heat in the 1920's and his students questioned and pondered many of his excerpts.

Wabi-Sabi refers to natures fingerprint on natural earth born materials. The persona of the wabi-sabi aesthetic include asperity, simplicity, modesty, intimacy, genuineness, and the suggestion of natural processes. Craftsman have made peace with their chosen medium's natural state. My motto has always been~“we cannot control Mother Nature but we can complement her best intentions”. That's complement spelled with an “e”. Ultimately it is this “natural state” that brings a certain genuineness and value to the artifact. The craftsman takes a difficult journey with not a lot of pay days or pay raises. This journey does not prove to be glamorous or even profitable much of the time. It is quite simply a path one takes because they feel a primal need... in the words of Robert Henri “the need to do and make”

The general lack of awareness in America that results from too much digital information obliterating our neocortex is killing Japettos Workshop. The tolerance for “natural processes” in America's marketplace or process in general is foundering like a newly constructed ship with no keel sliding out of drydock. The inevitable has already happened before our eyes. Everybody needs to back away from their Amazon accounts and their overnight shipping expectations and see where this is all leading. If you want the loving fingerprint of a craftsperson on your chosen artifact then pour yourself a glass of Scotch, sit down in an uncomfortable chair, pick up a pen with your comatose bluetooth mouse contorted fingers and write a note on real rag linen paper. Go out of your way to scrounge up some stamps you need to actually lick. Fold the note avoiding a paper cut so you do not bleed out and ruin your melamine end table with arterial spray. Drive your ass down to the post office, smile at the postmaster and hand him your letter. You now have become part of the “natural process”


~Clint Bova
Posted by Clint Joseph Bova at 8:40 AM