Personal criteria for my favorite grasshopper patterns:
1 ~Use of all natural materials
2 ~A pattern that can be tied in less than eight minutes
3 ~Least wind resistant geometry on a hook no larger than a #10
4 ~A pattern that casts well using tippet down to 6x
5 ~Create a geometry that can be fished wet or dry successfully
6 ~A wing that does not use turkey feathers or other primary feathers
7 ~A hybrid pattern an attractor/imitation
8 ~Legs wispy and very flexible as not to influence a take or hook set
9 ~Can be tied as small juvenile or adult (variables only in hook sizes)

Davie McPhail is an outstanding Scottish fly tyer. Davie grew up in the south west of Scotland and fished rivers such as the Stinchar, the Nith, Girvan, and the river Doon while growing up. After watching Davie tye flies over the years, both traditional and contemporary I quickly came to realize that he definitely has a particular point of view and unique methods that make him stand out in a crowd. I can honestly say he is one of my favorite tyers next to A.K. Best. Davie ties three grasshopper patterns that fulfill my criteria for great hopper patterns. The first pattern is called his “International Hopper” which is absolutely deadly. The second is the “Half Blood Prince” a black hairwing fly with red dyed pheasant tail legs. This fly I have used as a cricket pattern quite successfully with some slight adaptations. The third fly is called the “Jungle Bunny Hopper” that uses a Jungle Cock wing, knotted black dyed pheasant tail legs, and a black hackle collar. This is a gorgeous fly to say the least. Overall his patterns have both influenced me and inspired me to take a hard right turn and a closer look at tying successful small and large Grasshopper patterns. 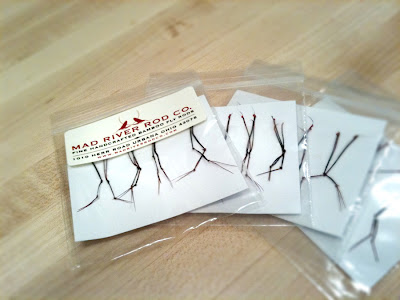 I pre-package all of my double knotted hopper legs because I size
them for both adults and juveniles, each package contains
enough legs for two hoppers. (x4 legs per juvy hopper)
One of the most distinguishing characteristics of the grasshoppers geometry is its hind legs or “jumping legs”. These legs are often over dramatized or under dramatized in many patterns. Many of the pre-knotted legs we get from catalogs or fly shops are pre-knotted legs made from several hackle fibers of pheasant tail. Often these look like bottle brushes or the business end of a broom. If you look closely at a juvenile grasshoppers legs they are fairly slender and are most definitely tapered. By taking just two hackle fibers of a pheasant tail and tying a half hitch at the very end of the fibers and a second half hitch in the middle of the fibers you get two joint sections in a single leg. (as seen in the anatomical diagram below and the above photo) 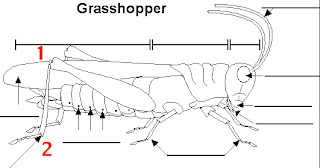 Again you can see that the taper is very narrow at the last joint. So the pre-knotted pheasant tail legs sold commercially are far from accurate and also very wind resistant. These larger pre-knotted legs can potentially influence the trouts take and the hook set because they are fairly stiff throughout the length. The geometry of the hind legs in reality is much more refined. I use four to six legs on my patterns. In general I have found that using just two fibers of pheasant tail per leg is adequate for both adults and juveniles. You can adjust the two half hitch distances for larger adult legs as well.
Knotting your own hopper legs is easy and although more time consuming is a cheaper and more convincing solution for your favorite hopper patterns.
~Clint Bova

If we go back in time and think about when we were playing in our back yards and had our first encounter with a grasshopper it was a simpler place in time. It is so easy to forget about the simplicity of these insects when it comes to their basic anatomy. When you look at the multitude of fly patterns imitating or interpreting this insect it is vast and overwhelming to say the least.

As a fly tyer I have scratched everything I know when it comes to tying grasshopper patterns. I decided to start with simple observations this season and keep a journal as well as an open mind. So I went on a collection rampage of juvenile grasshoppers in the months of June, July, and August. I also decided to match the uniform scale of the insects and fish them earlier than normal during the season. What I have found is neither astonishing or abnormal. In the U.S. hopper patterns are tied on hooks typically ranging from #6-12. In many cases you may as well be throwing a grenade into your favorite pool or run. Many juvenile grasshoppers come out of cornfields and meadows and enter streams and rivers like they are storming Omaha Beach. Trout love these kindergarten sized morsels.

This begs the question; why are these patterns typically tied on large hooks and look like a Bratwurst?
Maybe as fisherman we are programmed to fish these insects at the point where they have reached full maturity because its the only way we have ever interpreted the pattern from others. After all we fish mayflies from sizes ranging from #10~#24 sometimes even smaller! Why not grasshoppers too? Reinterpreting the act of fishing the grasshopper pattern is of special interest to me so I have taken the time to research tyers in Europe, South Ameria, South Africa, and even the Middle East. I have collected specimens that are a fraction of the size of the adults and tied micro versions of them. I have presented my offerings to both Rainbows and Browns in the early season. I did this to satiate my own obsession with this terrestrial insect and hopefully derail common seasonal practices that have annoyed me season after season. There are thousands of hopper patterns emulating only the adult geometry with minimal focus on the “juvys”. Are the adult patterns the result of some kind of seasonal Pavlovian response? The creative spirit is ignited when the “what if?” transpires into “what is”.
~Clint Bova
Posted by Clint Joseph Bova at 8:26 AM