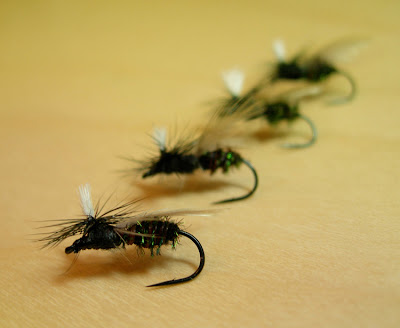 Above: this quilled parachute pattern that I tie
is simple and very effective (photos by Clint Bova)
During the summer months our terrestrial fly boxes are stocked with hopper patterns, ants, beetles, spiders, and crane flies. A much overlooked morsel in the trouts diet are black Flies and they can be found throughout the United States and around the world. After fishing over the years in Canada I quickly came to realize how much I hated these things. They can literally bite through layers of clothing and leave you cussing for hours on end. If you cant beat em, put em on the end of your line.

I have developed a pattern that I use when these water born nasties hatch during the summer. The Black Fly is from the Order of Diptera and hatch from running water. It is there that the larvae attaches to submerged rocks using silk holdfasts and threads to move or hold themselves to a structure. Eventually they pupate under water and emerge in a bubble of oxygen as an air born adult. Its surprising that many fly fisherman do not know that these are water born insects. They are kind of like the neglected middle child of the aquatic insect world. Trout eat them like I eat M&M's at the movies. I carry my Black Fly imitation in my vest in three different sizes. 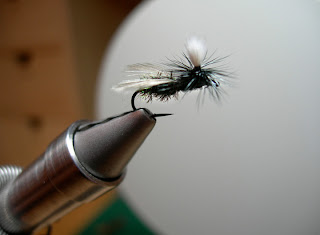 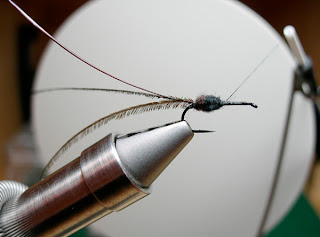 Step 1) Attach one black quill and two segments of peacock herl to a #14, #16, or #18 hook. I use the TMC 531 it has a black finish, wide gape, and 2x short. A similar truncated hook works fine. Build a up a dubbed body that has the geometry of an egg in shape. 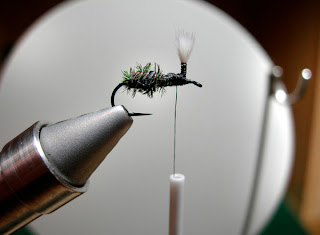 Step 2) Carefully wrap the peacock herl in a tight spiral to cover the entire abdomen and tie off. Now wrap the black quill in a loose spiral so the herl squirts through the quill. This imitates well the fuzzy abdomen on the black fly and the herl is somewhat iridescent. Now tie in a wing post using a turkey flat give a two hook eye distance between the abdomen and the wing post, this will allow space to tie in the hen wings and dub the thorax. 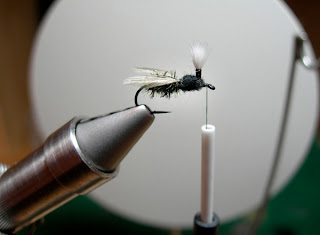 Step 3) Take a light dun pullet neck and match up two wings that extend beyond the hook by one hook eye distance. Secure the wings like you were tying up a pair of dun wings. Now pull them back and secure them with a couple turns of thread to create a delta wing profile. Now dub a black thorax just behind the wing post. 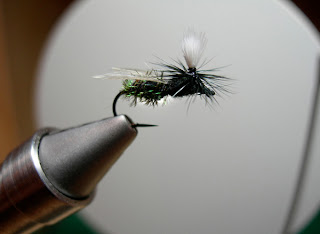 Step 4) Tie in black hackle as you normally would tie in a parachute pattern making sure not to interrupt the wing configuration. The hackle will lay slightly on the front portion of the wings.
Put a little head cement on the wing post to secure the hackle and just behind the hook eye.

This is a pattern that has served me well over the years that takes about 5-10 minutes to tie using traditional materials at a very minimal cost. Best of all they float and look like the natural.
~Clint Joseph Bova
Posted by Clint Joseph Bova at 12:16 PM