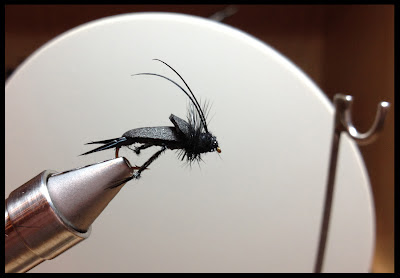 The black field cricket is fairly common in many parts of the United States. If you fish near meadows or farm fields you know that they are an important part of a trouts menu during the months of July, August, and even through September. As an avid terrestrial fisher and fly tyer I stock my fly boxes with many beetle patterns, Crane flies, Hoppers, and black Crickets in sizes #8-#14. Many of the patterns I tie specifically terrestrials combine natural materials with synthetics. 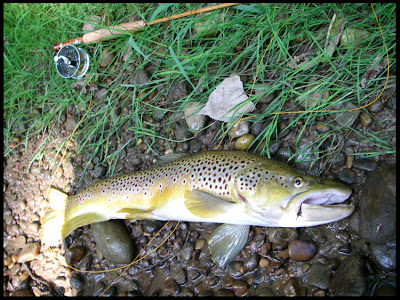 above: I caught this nice Brown on a black Cricket.
A hot August morning on The Mad River.

The very top photo is a version of Davie McPhail's Black Cricket pattern. I tie this pattern using knotted pheasant tail legs, black wire ribbing over the foam body, and 1mm Razor Foam. The reason I use knotted pheasant tail for legs is I've fished biot legs and they get crimped after they get hit by trout. I use Razor Foam in the 1mm thickness because I fish 2-3wt lines often during the months of July and August and the fly is a bit less wind resistant. After testing the pattern out for quite some time I minimized the amount of materials and can tie these up in about 5 minutes, I loose a lot of them to fish so I'm not trying to create “masterpiece look-alike ties”. These are going to get hit very hard by trout so I may go fishing with a dozen of them and come home with less than half in tact. The important thing is that they catch fish...big fish! 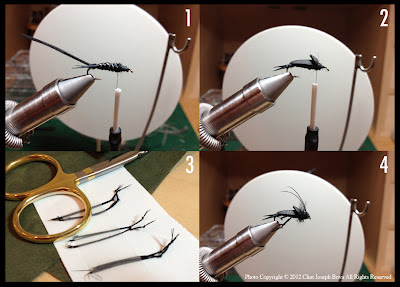 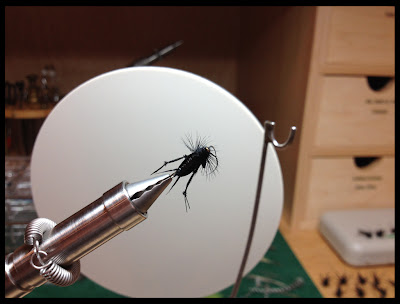 Posted by Clint Joseph Bova at 7:13 AM