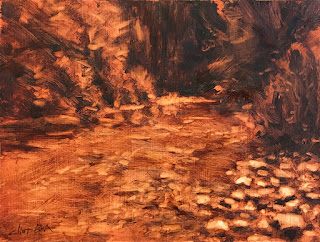 “Somebody behind you while you are fishing is as bad as someone looking over your shoulder while you write a letter to your girl.”
~Ernest Hemingway
Posted by Clint Joseph Bova at 11:13 AM 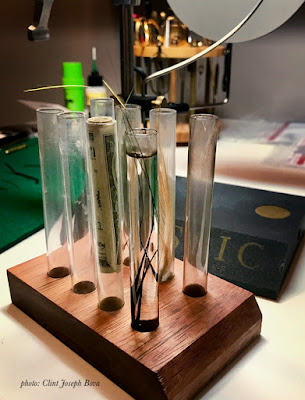 above photo: I made a simple test tube stand with a block of Koa and a drill press. A very effective way to soak large quantities of quills with no color bleed using very little space on your table. The footprint is that of a 4x5 index card.
Many of us fly tiers love using quills for bodies, but the problem has always been manufacturers over bleaching quills or not effectively creating a stop bath. The result is quills  that have a tendency to crack while you are winding them up a hook shank (even after soaking for a few days). I have bought many packages of quills over the years only to find that a large majority of them really are unusable.

About 17 years ago I purchased a crate of feather dusters from China. The feathers were all made of Chinese rooster with beautiful long quills! I now have a lifetime supply of quills. So if your looking around hardware stores or general stores always look for feather dusters! I have gotten over 200 quills out of one feather duster that costed me only three dollars. A packet of roughly 20 quills will cost you between four and eight dollars depending upon what country you buy them in. If you do the math its a very expensive proposition to tie with quills purchased at retail.

Soaking quills effectively is also part of the problem. I built myself a wooden test tube rack and I can fully immerse and soak multiple colors of quills. Using up valuable space and time with dishes and wet paper towels really is not the way to go if your cranking out a whole bunch of quill bodied flys. I built a test tube rack about four by five inches that holds eight test tubes. With this set up you can soak multiple colors without color bleeding and hundreds of quills if need be.
I hope this is helpful for anyone wanting to tie with quills.

*Also Check out A.K. Best's book Production Fly Tying the 1st edition. This book is great to learn how to strip and dye quills. 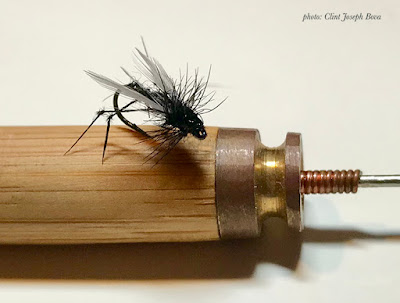 We often see pictures of midges with their wings pulled together and resting on the back of their abdomen. The wings often splay when they are stuck in the surface film along creeks, rivers, and ponds. Typically the pictures do not capture that struggle that the insect experiences. The wings of a midge are proportionately shorter than their abdomens and angle out and back like the delta wing on a fighter jet. The following pattern is one that I've developed myself over the years and really has saved me on the stream from getting skunked especially in the late fall (click on photos below to enlarge) This is a relatively easy pattern to tie and master in a few hours. Pay close attention to proportions and you will find it is a very useful pattern year round. 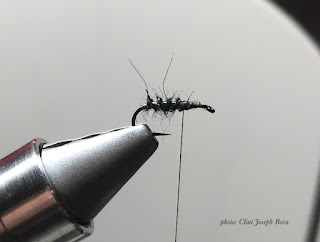 Tie in mylar to your hook then dub loosely your SLF squirrel three quarters up hook shank, Wrap mylar and tie off 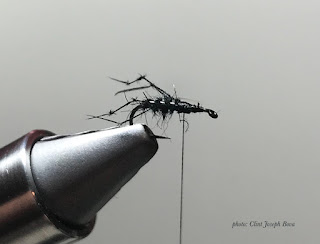 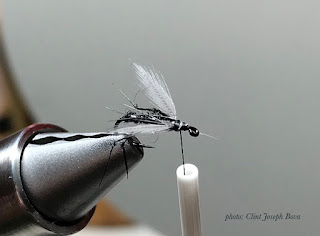 Tie in Hen tips that are length of hook shank or shorter. Dub in a tiny doughnut collar just in front of the set of wings. This will keep them splayed back towards the end of the fly. 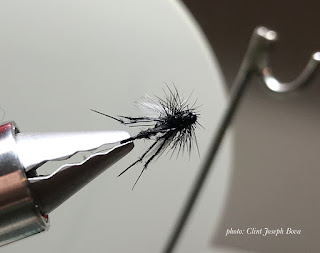 Wrap a horizontal hackle collar with your black hackle, three or four turns is more than enough. 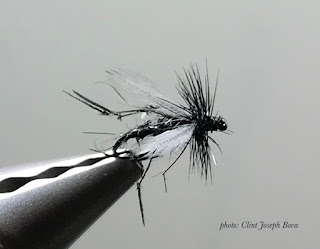 This is a relatively easy fly to tie and the knotted legs give your fly stability and splay to form little outriggers to keep your fly on top of the surface film.

This fly has been a blessing and has saved me on the river countless times especially when the fish are very finicky!
~Clint Joseph Bova

Posted by Clint Joseph Bova at 7:36 AM