As human beings we quantify and categorically bucket everything we see. We put labels on things and file them away in our minds. When we step outside of this categorical tendency we find ourselves uncomfortable and struggle with placing ourselves into context with the things we cannot see. In nature and fishing the unseen is what we seek. When the unseen suddenly reveals itself Mother Nature stares back at us with a certain truth. This is a sudden glimmer of honesty in its pure form that awakes and replenishes our senses. We seek it out again and again like a child reaching into an empty or full cookie jar high up on a counter top.
~Clint Joseph Bova 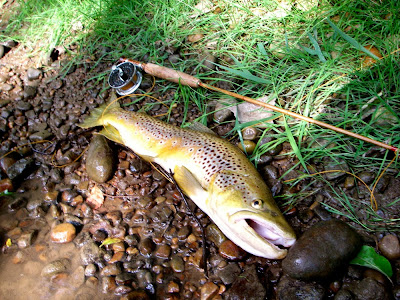 Posted by Clint Joseph Bova at 7:37 AM


From season to season insect forecasting is always a crap shoot. Every season certain insects can appear in prolific numbers or may not appear at all. Masked hatches, flooding, temperature, barometric pressure, and wind all play an important role in the comings and goings of insects. This accounts for not only water born insects but terrestrials alike. So the question that begs an answer is can we count on the same fly season after season to produce consistent results? The answer is a definite no.

The cycles of mother nature are very fickle. As an example during the fishing season of 2012 Japanese beetles were prolific around our rivers. I even had to spray insecticide on my dwarf maple trees to kill off the beetles. I live less than a mile from the nearest trout stream. Because there were so many beetles in 2012 the fish zeroed in on them. Doug Swisher explains this phenomenon as the “pounds per meat law”. The most plentiful and attainable insects are at the top of the trout’s menu. I used a Japanese Beetle pattern for the better half of the fishing season of 2012 with incredibly consistent results. Coincidentally this season of 2013 (regional to my location) there were literally no Japanese Beetles to be found. The same beetle pattern produced a few results but nothing out of the ordinary as in 2012. So the old stand by meat and potato flys may work but they may not be that “sweet spot pattern” season after season. The season of 2013 I managed to find the fly that worked consistently for my home river and it was a size #20 quilled Blue Wing Olive. I always have that one fly that is the “seasonal special”. I suppose this is why fly fishing is such an engaging sport, Mother Nature keeps you on your toes season after season. Complacency and hard and fast rules about fly selection is a sure way to get frustrated and defeated. Keep your eyes open and keep discovering season after season.
~Clint Bova
Posted by Clint Joseph Bova at 11:43 AM