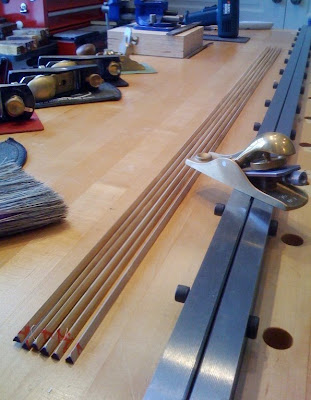 Standing for long hours leaning over a bench, planing, straightening strips, pressing nodes, turning cork, and squinting a lot at 8/0 silk thread you realize that time passes very quickly but that time spent working at the bench is time well worth spent. For the processes and manipulations that go on during the course of building three bamboo fly rods at a time, which is how I work for the most part, one also realizes that solitude can be found not only on a river but standing in front of a well crafted bench.

About twelve years ago I had a wild hair and decided to build the ultimate rod making bench. Fred, a master cabinet maker from the west coast, was a good friend I worked with for many years and always wanted to make a traditional cabinet makers bench. One day during the fall of 1998 we decided to go for broke and took a trip to a Homish lumber yard and purchased some very large pieces of beautiful maple. We spent a lot of time designing, customizing the plans, and eventually resawing very large heavy blocks of maple to make two benches 7 feet in length. Having access to our model shop at FITCH day or night we had access to a Powermatic 24” bandsaw, large jointers, massive table saws, not to mention 4 lathes, a five axis router, 4 Hurcos (C&C machines), a large spray booth, mortiser, two large drill presses, a large power planer, and a ton of layout space. We spent roughly three months making these benches that weighed close to 500 pounds a piece. We used traditional mortise and tenon joints and milled all the hardware. We mounted the old large blue Record vises into the benches, which were of the same design and size that were used to build the British Spitfires of WWII, these imported vises unfortunately are no longer available.

Years later my bench has really become a best friend in many ways. It’s original odor of tung oil has given way to the distinct smell of bamboo. The bench is like a Swiss Army Knife because it can transform itself in multiple ways to meet the demands of all the processes involved in building split cane rods. The importance of a good bench is that it becomes an extension of your body.

The bench acts as the ultimate vessel that houses everything you need to practice your high craft. Occasionally I treat it to some indulgence and give it a good wiping of tung oil for being such a good friend.

In the lap of recent generations lies the predisposition to have things in our own time, in our own space, and at our own pace. It is unfortunate because it points to our lack of attention to detail, patience, and understanding. Nature has little tolerance for these cumulative traits. The nature of fishing in general is really an ongoing exercise in looking from the outside in and finding a sense of pause within ourselves. If we go to a river with little or no expectations, and we merely accept her for the moment we find that the focus is taken off of the results and placed on process, introspection, and sense of wonder. We can then in many ways relive our childhood joy and innocence time and time again.
As we grow older we put pressure on ourselves to be in places on time, be productive, up on current weather and forecasts, and generally trying to predetermine our experience before it has even started.
If we experience these destinations in this manner, we are really setting ourselves up for disappointment rather than a basic sense of happiness and wonder that fishing brings to us all. Sometimes I like to approach a piece of water with no rod, no pack, nothing, and just sit. It’s hard at first especially if you happen upon a hatch or even a nice fish. I always leave with a smile because it’s a healthy form of restraint that allows us to better understand why we enjoy being on rivers in the first place. I love looking at a beautiful painting of a little rural stream it sparks the inner child in me on many levels. You cannot step into this water, you can only look at it with a sense of elation and pause. A stream of consciousness that takes our imaginations to a place with no expectations or sense of time, here in our own unforecasted moment there remains only endearment and wonder.
~Clint Bova

Posted by Clint Joseph Bova at 8:00 AM

Like all things in nature there is co-existence or no existence, and when it comes to the resourcefulness of wildlife everything is up for grabs. On a sunny afternoon back in 1996 I came upon a group of DNR conservation officers doing some fish shocking in some fairly unobstructed and nondescript water, nothing more than typical meadow stream water. I pulled out of the water and went up the embankment to get out of their way. It was a long mundane shallow run that stretched for 50 yards, slightly riffled water that had no real “fishyness” in personality. There were no pools either upper or lower to this location.

After about ten minutes I realized that they were netting fish that quite honestly were between 18 and 22 inches and in the cooler they went. Again this was water that typically most fisherman would pass up at first glance and this particular area was really no more than 16 to 24 inches deep. I was a bit dumbfounded by the size of these brown trout relative to the stream geometry.

About a month later in the evening I mustered up the energy to sit on the bank in the same location till about ten at night and wait to hear some predatorial sipping and chomping. I was happily greeted by these sounds. I entered the stream slowly and turned on my headlamp and hugged the embankment. Soon I saw wakes and silt trails of darting fish in the flat runs but they went directly into the embankment. Like meadow stream banks they are level and the grasses lead towards the edge with a slight undercut but not much. I had often seen muskrats in this area and came to the conclusion that these larger browns were foraging in the night and were in lies during most of the daylight hours. Lies that could very possibly be muskrat dens yet positioning themselves so that they were still getting oxygenated water from upstream so as not to be in a passive position.

The muskrat (Ondatra zibethica) is not actually a rat, but is classified as a rodent because of its teeth. These smallish critters have four large yellowish incisors in the front of its mouth. These animals also have flat molars for grinding vegetation. North Eastern muskrats average about 2 pounds in weight and 2 feet in length, including a vertically slightly flattened 8-to 12-inch tail. The waterproof fur is soft and thick and is generally dark brown on the back and sides, becoming light grayish brown on the belly. The muskrat has a stocky appearance due to the apparent lack of a neck. They are nesters and gatherers and love to bore holes in undercuts and embankments. They can be transient from season to season which is intriguing to me from the standpoint that the abandoned den can be repurposed as a fish lie. After some skepticism on my part I decided to come back the next day and wait out these larger cave dwellers. There was a little olive hatch coming off of the water and there were some super sippers, big bulges, and purposeful takes. I hooked into a nice 17inch brown that took off straight into the embankment. He bolted into a muskrat hole and popped my tippet. I looked up on the grass and sure enough there was a second hole going straight into the ground. It was as though a whole new process flashed into my now lathering brain. We typically look for obstructions, root wads, sweepers, weirs, riffle runs, tail waters, and deep holes as the usual suspects. But this was a new twist for me. To this day I now look for larger browns differently in meadow streams, and shallow spring creeks, an undercut is a good lie but a muskrat hole opens a bigger opportunity especially when you consider the dry fly potential late in the evening and early in the morning. So for all of the bridge trolls, pocket water pals, pool people, and sweeper loafers, you may consider looking for some less noticeable, unsung, unloved pieces of water for the big ones.
~Clint Bova
Posted by Clint Joseph Bova at 1:58 PM