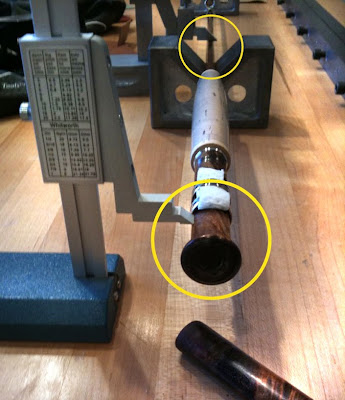 Shown: leveled guide spline face up in v-blocks with one
height gauge on the spacer the other on the guide spline

I recently had a conversation with a Ontario bamboo rod maker about the number of both bamboo and graphite rods out in the marketplace that have misaligned reel seats. By this I mean the reel seats on the rods are not aligned true with the guides on the guide given spline. The result is a reel that hangs askew or at an angle relative to the guides. This is due to the fact that either the manufactures or rod makers are not truing up the seats to the spacer dead on or using a jig of some kind to measure proper alignment prior to the assembly. For several years now I've used this little trick I developed using two v-blocks and two hieght gauges and have shared it with some some of my fellow rod makers.

To get the alignment dead on you need to locate the intended spline for the guides and level it using two v-blocks. Level the spline guide side up by placing the rod in the v-grove block and pushing a hieght gauge down onto the spline to level it within the angle block. Using another hieght gauge adjust it so that it meets the mortices or cross diameter points on the spacer moving it from one side to the other until you have both sides of the diameter or mortise cuts level to one another. Now mark it with a scribing knife on the bottom of the spacer and also scribe a line on the bottom cut of the butt section so both scribe marks meet as a single line during glue up and pinning. Again the the scribe marks are aligned during glue up and you have a dead on leveled spacer. This works for all types of reels seats. These are the details a rodmaker should be paying attention to during the assembly process. Eyeballing is not a good habit because your eyes need to focus on two different planes at once, the guide spline which is flat, and the seat which is round. Unless God gave you protractors burned into your retinas the possibility of dead on alignment is minimal when not using a jig of some kind.

Posted by Clint Joseph Bova at 9:03 AM